The best book ever written about geese. 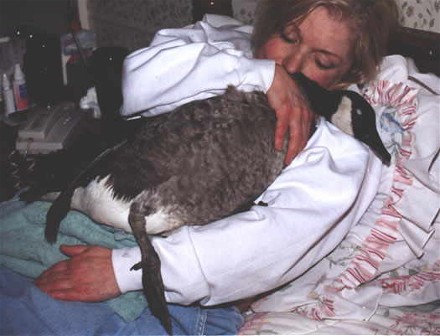 My husband caught us napping together and this is the photo. He is my Huggy Honker, my best pal.

I was doing housework when my girls came in screaming. Our puppy had invaded a goose nest and brought back a mass of tightly intertwined newly hatched goslings with only two alive. We were a week out with the goslings doing well, when suddenly about 12 AM, I heard one of the goslings (later named Dirty Bird) making a lot of noise. I picked both up, but it was clear that the second one was dying. I can only suppose that there were some internal injuries that eventually caused its demise. Holding them seemed to calm both until one died. I thought stupidly that perhaps putting the dead one in with DB would calm things down for the night, but DB was pulling on the dead one's beak and literally screaming. DB was wild and did not take to human condolences. He cried throughout the night. All I could do was to remove the dead bird and hold DB. However, as it grew later, I became afraid that I might crush him should I fall asleep. Throughout the night, I laid on my back with my right palm up and when the circulation stopped in that arm , rolled over on my stomach with my other arm in the cage with my palm up. As the morning dawned, he stopped screaming,  stepped into the palm of my hand, sat down, and seemed to go to sleep. I very slowly closed my hand around him, and the bond was forged between us forever.
Because of DB's injuries, he developed a curved spine, inability to fly any distance, and worst of all has to be watched carefully if he is in water too deep for his feet to touch the bottom, because he has a tendency to capsize. Despite this, I love him more than life itself. For the last 10 years, we have propped up in bed together and watched TV every evening. He stays in the house in a large dog carrier with the top off. He could come out of this at any time he chooses, but doesn't and takes showers and baths in the house. We take him outside in the "goose chariot", a bucket to help prevent poop accidents. The way he sticks his head over the side of the bucket as he's being carried outside reminds me of the charioteers in "Ben-Hur".
I had no idea until just recently that other people were as enamored of geese as I am. Of course, Dirty Bird is a non-releasable wild bird raised from a gosling by me. He stays in the house unless I am out with him and enjoys baths and showers, so my love for geese may be on a different level from ordinary nature lovers. However, I also raised three other goslings at different times and successfully released them into flocks. Therefore, I still feel the respect and awe that these great birds inspire in those of us who love them.      Here are some other photos of DB that I'd like to share with you. DB likes to place his bill over the top of my nose as some sort of an affectionate gesture, but HIS bill must be on top of my nose or he gets very upset. There are some things I don't know about birdie protocol. 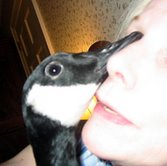 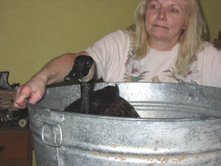