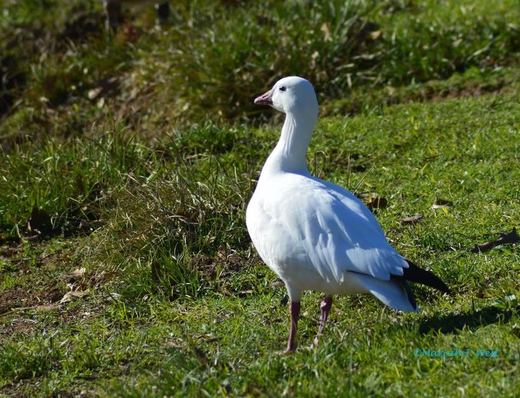 I hadn’t planned to become a surrogate parent to some 150 Canada geese but when an unexpected drought took hold of our central Alabama community a few months back, there was little choice. There was no grass.

Like their thoroughbred counterparts – Secretariat, California Chrome and Zenyatta — geese devour grass like it was candy. Of course they love their treats: cracked corn and other grains but grass is what sustains them; what drives thoroughbreds to the finish line and geese to the skies, the thrust behind those powerful wings.

These were also geese I have known for more than a decade, that are part of my small study group. I couldn’t let Horatio starve; nor allow the fabled Gandy and Olivia, the lake’s power couple, to grow thin. I may not see Horatio for weeks at a time but he is as much a part of my life as Andy, my long-haired oriental cat (also an accepted presence within the small geese community).

Fall is also when geese are piling on fat for winter so a shortage of grass can have dire consequences.

I rallied our small community, posting flyers and advertising on a city blog, asking residents to help feed the geese during this trying time.

Bring fresh bread, I wrote, or cracked corn and grains.

By mid-November — three months into the drought — I was praying for rain. The park resembled a wasteland. The ground had turned hard. The lake had dried up to where there was just enough water for the geese to swim comfortably.

The drought did, however, provide a chance to study geese behavior under difficult circumstances. How much food did they consume, how often did they eat and would the sustenance be enough to carry them through the winter?

The geese looked healthy enough and seasonably chubby but eventually I could sense that they were craving grass. There was nothing I could do.

The geese in my study group continued to fly in and out but several went missing, including a gander that had cataracts in both eyes. I hoped they had flown north to Tennessee where there was rain.

Three of our crippled geese — who are missing limbs but can fly — also stayed closer to home, and one – a gregarious, outgoing gander that survives nicely on one leg — became a community favorite.

I don’t know if we got caught up in election fever or what but because of his resiliency, we named him after our new president. The Trumpster, we call him.

I was also impressed by the gander’s brilliance. One day I left the city library to find him, amid a sea of same-colored cars, standing on the trunk of mine.

“How did you know which car was mine?” I asked, as I scooped up his corn.

In the meantime, the geese were their usual raucous, territorial selves, chasing other geese that weren’t “family”. Among their humans, however, they were exceedingly gentle. We could do no wrong.

There are also other benefits to being in the company of geese. They get you away from video games and into the outdoors. It is also almost impossible to be depressed around them.

After years of study, I had also concluded that the Canada goose is the most joyous creature I’d ever known. There seems to be a natural effervescence, an inborn enthusiasm that carries over from generation to generation. I’ve never seen anything like it.

It was Thanksgiving before our prayers were answered. The rain began with a few sprinkles that blossomed into huge, intermittent downpours lasting two days. Three months without rain and you want to just stand there, letting it wash over you. Everyone rejoiced, including the geese, as they took to the lake with sheer abandon. To their great joy, clusters of grass, as if in celebration, began popping up overnight.

Despite increased rainfall, the drought is still with us. Our county is no longer listed under exceptional drought but forecasters warn that it will be another few months before water levels in other parts of the state, including neighboring counties, are back to normal.

February and March are normally hectic months. The nesting season is almost here and the current goslings, now almost a year old, face separation anxiety as their parents leave them behind.

Geese also begin choosing lifelong mates this month. Like us, Canada geese fall in love; perhaps choosing a mate more carefully than any of us because for them it really is a lifetime commitment. The ganders are also among the most romantic creatures on earth.

Every day is Valentine’s Day for females that are part of mated pairs. Their mates hover over them, seeming to whisper sweet nothings as they brush their necks with those powerful bills. And it would seem to have little to do with sex. Geese mate only once a year. The rest of the year is devoted to romance (and parenting if there are young).

The winter contingent has also begun arriving (those geese presumably on their way to the Mississippi Flyway, one of the nation’s busiest migratory routes, about 150 miles west).

Among them is a white harbinger of good will.

Every winter a snow goose shows up with a group of Canada geese. (Snow geese winter in Arkansas, and this little guy probably got separated from its group.)

Our “regulars” also no longer spend the day here, leaving for their respective grazing locations each dawn and reappearing, like clockwork, at dusk for corn. Dozens fly in, simultaneously, coming from every direction, in the wondrous V-formations, and treating us, nightly, to one of nature’s most thrilling spectacles.

The elusive snow goose also remains. This year, he can’t seem to get enough of that sweet-tasting corn.