On November 15th, the last of Bon Bon Pond’s resident Canada Geese and their faithful duck followers flew away for the winter. God speed my beloved web-footed friends! Stay safe, warm, well-fed and hurry back next spring! 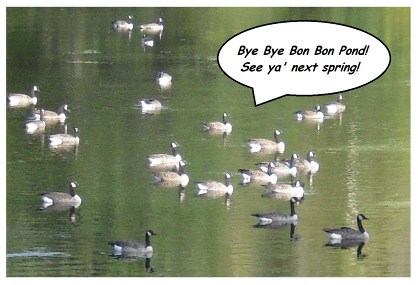 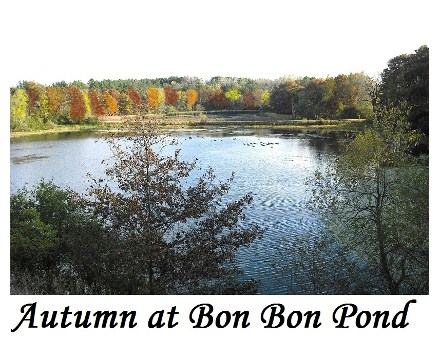 Another hunting season has come and gone without incident. But that hasn’t always been the case. My family moved to Stillwater in 1969 and at the time it was more like the Wild West. I remember my mother telling her friends where she was moving and they all broke into tears. Only recently had the town been added to the twin cities toll-free calling zones but it was still considered the hinterlands. Transplanted city folk, mom, dad and I didn’t know much about country ways--and that included the farmers’ attitude toward animals. Additionally, some folks out here were pretty much of the mindset that you could shoot practically anything you wanted, whenever you wanted and wherever you wanted.

And then came Lee LaBonne. My mother had the hugest heart. Kind, compassionate and a friend to many, she loved all God’s creatures. It had always been her dream to have a place in the country where she could enjoy nature. Imagine her surprise when our idyllic peacefulness was repeatedly invaded by lawless marauders. 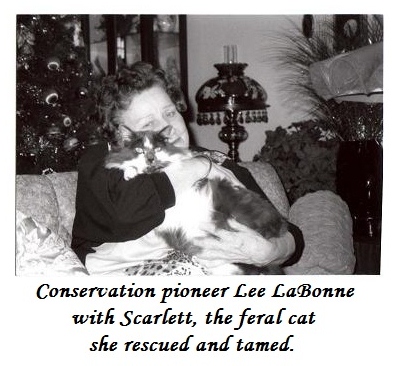 Two particularly vivid memories remain. Just a few months after we moved in, my father was working nights and mom and I were home alone watching TV in the living room. Suddenly, our dog pinned back her ears, bared her teeth and began to bark. We walked out onto the deck and heard men hollering and banging on pans. Plus a pack of what sounded like bloodhounds were baying. Terrified, mom ran for the phone to call the police. When the Hellish sounds drew closer, she ran back out onto the deck and screamed at the top of her lungs “I have an axe and I know how to use it. Get off my property!” The clattering ceased, the hounds were hushed, and the next sound we heard were car doors slamming. When the police arrived around a half hour later we were told the trespassers were hunting raccoons.

Another incident occurred when mom was home alone one sunny summer afternoon. She was out hanging clothes when a volley of gunshots erupted. Running toward the pasture she spotted a man standing on the railroad tracks that border our property, brazenly shooting at pheasants, directly over the heads of our four terrified horses. Mom watched one bird fall and nearly hit my mare as she ran for the safety of her shelter. Throwing caution to the wind, mom turned around and ran for the house, grabbed her car keys, jumped in her V-8 Plymouth and took off in hot pursuit after the poacher. As his car came toward her she made a hard turn and blocked his vehicle. With her car still running she flew out the door and approached the shocked hunter. Mom read him the riot act then demanded he give her the pheasant.

As a testament to our decades long struggle, my house still bears the bullet hole that tore thru the garage window and lodged in the house wall, right above my parents’ bed.

These close encounters of the third kind were an all too common occurrences around Bon Bon Acres in the early years. Mom got to know the local constabulary quite well and all were concerned for her safety.

So much stress. So much tension. So much trouble. It was never our intent to deprive people of a legal pastime. All we wanted was our little piece of land, and its wildlife, to be left alone.

We talked about moving but it didn’t seem fair to have to give up our dream. Instead, we stayed and kept up the good fight.

As years went by and more people moved into the area—many building upscale homes with huge barns that housed expensive horses—no hunting/trespassing laws became stricter and better enforced. Soon, the land itself was safe, but the pond remained a problem.

Sometime last century—no doubt before there was a DNR—some public official got the bright idea to put a road thru a lovely small lake. Said politician must have soon decided he hadn’t done enough damage so he signed off on the decision to build a huge embankment for a railroad track. Thus, what had once been a lovely little lake was now three ponds. Although my family bought all the land on the west side of the largest pond there was a problem when it came to preservation: that damn road. Minnesota law allows hunters to shoot over water from a public thoroughfare.

Mom and I struggled to protect the ducks and the Canada Geese, as well as the muskrats, for years. Annual hunter/police confrontations made us dread the fall. In the autumn of 2002, after mom and dad had both died, I met my Waterloo after confronting two angry teenage boys who had launched a boat onto the pond. The next morning I discovered six poached deer with nooses around their necks dumped at the foot of my driveway. At this point my neighbors became concerned for my life and contacted the Washington County Sheriff.

Finally, after years of strife, the situation had come to a head.  Enter, the cavalry. A phone call to Washington County Parks Director of Operations Mike Polehna changed my life. In charge of the neighboring Pine Point Park, which manages the south pond, Polehna is an expert on hunting laws as well as area topography. Armed with aerial park maps that proved anyone hunting on the road, or the railroad bank, would violate Minnesota law, which prohibits shooting within 500 feet of any domicile—in this case, my house, or my neighbor Bonnie’s—Polehna met with the sheriff and thus provided the police with the facts they needed to keep the peace.

Also at this time, the May Township Board got involved, determined to end the trouble once and for all. “No Parking” and “No Watercraft Launching” signs were erected on the road.Since then, there has only been one incident and that was easily and peacefully resolved. 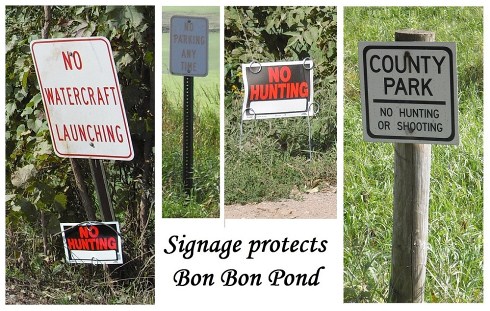 I owe a deep debt of gratitude to Mr. Polehna and the May Township Board for their invaluable assistance, plus my wonderful neighbors—especially Bonnie, who stewards the east portion of the water. With their help, Bon Bon Pond has turned into the waterfowl sanctuary of my mother’s dreams. Eagles have been spotted and this year we even added a pair of Trumpeter Swans to the visitors’ list!

I hope the story of Bon Bon Pond can help other lovecanadageese readers who might be experiencing similar problems with unwanted hunters. Take my advice and do NOT ever confront people with guns, as my mother did for many years. Become knowledgeable! Look for allies! It took me years to find Mike Polehna, but there are other good people out there. Talk to local law enforcement--but remember they must enforce the laws, even if we don’t like them. Get to know the local game warden, conservation officer or parks official. Work with other preservation groups. Enlist the backing of your neighbors. There is strength in numbers! And don’t forget to lobby your local government for better privacy and preservation policies. Be polite, be patient, but be persistent! Sometimes something as simple as “No Parking” or “No Watercraft Launching” signs can make all the difference in the world. 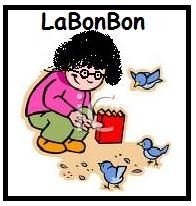 Follow Kathleen as she takes you through the seasons with her writings about the wildlife, who are her hobby, her best friends and her passion. Please visit Kathleen's Blog.