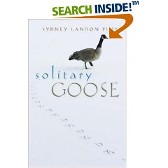 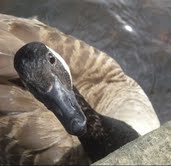 I’ve been visiting the lake near to where I live for as long as I can remember. It’s only really been in the past few years though that I’ve really grown close to the geese that live there, and got to know them as individuals. There can easily be over a hundred Canada geese on the lake during the summer when they have their half fledged goslings, and more flood in to spend their moult there. It was at this time last year that I first heard mention of there being a Canada goose with only one eye. I soon found the goose, who though lacking an eye and looking rather run down, was a friendly one and would come to me for food. We named him Moby and for the first few weeks of knowing him, Moby found a friend in another goose who was ‘different’. We named this other goose Quin, and for a short time Moby had a friend who he would venture onto the field behind the lake with. He was reluctant to risk this alone due to his impaired vision, but with Quin to act as extra protection, he would follow him up there to graze. 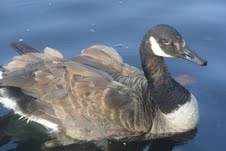 When Quin died, Moby was by himself and picked on by the others. He would not go onto the field by himself, and his body condition deteriorated. Heavy rain was a real problem for him, as his feathers seemed to have lost much of their ability to repel water. Worried that he would suffer feeling so isolated, I would walk to the lake in any weather, every day, to keep him company for an hour or so. As strange as it sounds, this really did seem to cheer him up. Even though he looked tatty and rather ragged compared to the other geese, he would strut alongside me – and sometimes my mum, too – like a big, proud gander, flapping his wings in a ‘look at me!’ sort of way. Getting hold of cracked corn with which to feed him was near impossible for me. I couldn’t find it, so I would take him wild bird seed and he learnt to take this from my hand. Between us, he and I worked out a way that involved him taking it from my fist so that the other geese would not steal it. His trust in me defending him from the other geese was such that he would stand pressed against me and allow me to lightly drape an arm over his back.

As well as his grain and bird seed, we took him wholemeal bread with cod liver oil specially adapted for animal use for him. If he knew I had bread, he would refuse to eat the grain or handfuls of long grass I brought him like some naughty child not wanting their greens. He was unable to jump out of the lake, which is not a natural one and has high sides. He would, however, allow me to lift him out as long as I did this very briefly and I never sought to hold him for longer than it took to place him on the ground beside me. Once out, he and I would walk around the lake together whilst he grazed on any patch of vegetation growing alongside the path. He would follow me, and come when called if I found a patch of grass and bent down to point at it. Other people walking around the lake soon came to recognize both Moby and myself. Every day people would stop and comment on him, sometimes saying how he looked better than the day before, or asking why it was he would follow me or stand so close without being aggressive. I’d like to think through this Moby helped to change some peoples’ minds about the geese, and proved they are far from the aggressive, hissing creatures people stereotype them as.

Other people, after hearing about Moby, would even bring me food to give him. One lady actually went out and bought high quality bird feed and handed me a bag of it for him, telling me she hoped it would do him good. One day, when I sat by the lake feeding him grain and trying to keep the other geese back so he could get the majority of it, he scrambled into my lap and promptly sat down and continued to feed from there. From this vantage point, he then found the courage to peck at the other geese who tried to take ‘his’ food, which was something he never dared do ordinarily.

Moby was never a tame goose, despite his behaviour. People would ask if he was my ‘pet’ goose, but he was never a pet – he was a friend. I had worried that by letting me lift him, or letting me touch him, I would be making him vulnerable to people who might use his trust in people to harm him. Moby was capable of separating friend from foe. He did not like strangers at all. When people stopped to talk to me, about him, he would walk away from them and wait for me by the water, and only join me when they had gone again. If anyone else tried to touch him or even get too close, he would hiss defensively and seek safety in the water. He could recognize me at a distance, and I never had to look for him, he would always see me before I spotted him, even though he had one eye and I had two.

I had thought the winter would kill him. No rescue would have taken Moby, as many seem to regard his species as a pest now, and although he looked less than perfect, taking him from his lake seemed cruel. Nor was he ever so bad as to deserve to be euthanized, which was all people seemed able to offer. Though his feathers became damp in wet weather, those feathers underneath were always warm and dry, so although I worried hypothermia would take him, it did not. We had the worst winter weather in 30 years, and it seemed as if someone, somewhere, was determined to take my goose from me. But Moby seemed to thrive in it. He would jog over the ice to greet me, and with only a patch of water free of this, all the geese were in one spot, which meant he had company he had previously been denied. Sadly, two geese perished on the ice, and each day I feared Moby might be next, as these geese had looked in fine health, whereas he did not. Moby however remained bright and really did seem to look better than he had.

The day when we walked to the lake and Moby did not come to greet me, I knew something was wrong. I tried to tell myself that perhaps he was just sleeping somewhere, or perhaps he was around the other side of the lake, even though it was frozen with thick ice there. Moby could not fly far due to his feather condition, so I knew he could not have left. The ice had melted a little by the next day, and a full circuit of the lake revealed at points along the railings where there is undergrowth and pockets of grass that at least three Canada geese had been taken by foxes. One of the places where this had obviously occurred was a patch that Moby had often used. The snow had only recently melted, revealing the grass, and with the water frozen, Moby could hop out by himself. I think, seeing the grass and being able to reach it, he must have jumped out and been grazing when a fox took him.

It seems so unfair in some ways that Moby should lose his fight for life in that way. He had survived losing an eye, and then adapted to this impairment. He had avoided starvation with a little help, and I had so wanted him to survive until a moult so his feather condition might improve. In some ways it seems as if he was always meant to die, and my intervention just postponed the inevitable. However, I really do believe that he enjoyed my company as much as I enjoyed his. He taught me a lot about Canada goose behaviour, and I doubt there will ever be a goose with which I can spend hours walking and grazing in that way. All geese are special and have their own unique character, but Moby truly was one in a million. Going to visit the lake now feels almost difficult, as I expect to see him jogging or swimming towards me, and I know he never will again. I stood there feeling sad over this the first time I went up there alone, and had perhaps a second or two of missing him when a group of thirty or so geese - and amongst them those I could easily recognise as I know them and have names for many - came charging to greet me. I can't avoid the lake just because Moby not being there makes me sad, because the other geese still are there and need the extra help at this time of year. I think part of me is glad that he never had to leave his home, and that his end was a natural one. 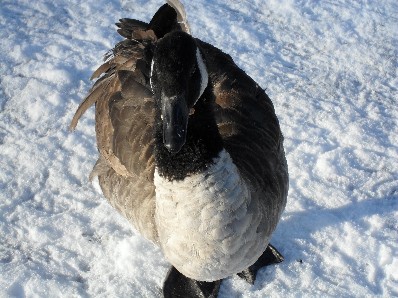 Moby, the last day I saw him