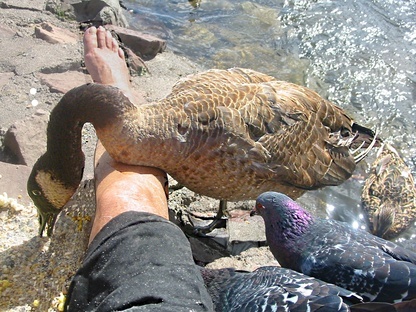 I am not doing anything special for Thanksgiving, but I have plenty of reason to be thankful!!

Did I tell you about our little Canada goose we named Spunky?  About how he was injured in one wing and couldn't fly, and how terribly worried we were that he would not make it through the winter where he was because there would not be enough food to sustain him, and hardly anyone goes to that place in winter, so there would be no-one to feed him there?

Did I tell you how we have been praying for him these last two months, and trying everything to find some sanctuary or rehabilitation facility to take him, but there were NO openings for him ANYWHERE?  Did I tell you all about this....and little Spunky's plight?....and how concerned Joe and I have been for him?  Well, in case I didn't, here is the story now, of our goose’s need, and how the Lord has WONDERFULLY answered our prayers for him!

Someone I met during the summer was telling me about another park they knew of, which was very large, and has a beautiful duck stream and pond, many, many trees, and is right on the shore of a lovely bay. Not only so, but you can drive right in to the park with the car, and park close to the area where all the birdies hang out, and feed them. MANY people go there to feed the birds, and they even keep the driveways and the parking lots plowed out all winter, so access to them is do-able, and you wouldn't need to make a long trek on snowshoes like you would at the more remote place
where Spunky was born!

Well, a couple of weeks ago I remembered about this park and went to check it out, and I thought how GREAT a sanctuary it would be for Spunky.  I had even heard there were a few other geese that lived there year round, because each of them too had some little disability that prevented them from flying south.  My love and I talked over the idea of kidnapping Spunky and taking him there, and we prayed about it together.

We decided the first thing I would need was a medium dog crate to transport him in the car.  They were very expensive....around $150.00.  We prayed for a dog crate, and I checked the tiny classified section in the local paper, and lo and behold, some people were selling one for only $25.00! It was like NEW....and the PERFECT size!  The next thing I needed was a special, sturdy bag to carry Spunky along the trail, past hikers and tourists, visitors and people out for a walk with their dogs and children.

I also had to pass the park ranger at the gate, and make it, still unseen to my car in the parking lot....then OUTA THERE!  I was planning to KIDNAP a wild PROTECTED Canada goose and STEAL him from the place in broad daylight under the rangers’ noses don't forget!

With all this in mind I went to the local thrift store, and there on the rack was an unusually large grey tote bag, that looked just like the sort of bag you might SEE someone carrying in the park.  It was just large enough, I estimated, to fit Spunky into once I nabbed him, and it was only $4.00. Again the Lord had met the need for our dear Spunky!

Finally, with all our plans and equipment in place, I drove to the ‘crime scene’, set up the crate on the fold-down back seat of the car where it sat out of sight behind my darkly tinted windows, and off I went walking toward my spot with wild birdseed in my regular black bag over one shoulder, and the large grey bag with the black car-blanket inside that I would use to nab Spunky with, over my other shoulder.  I was on a mission this day, and the adrenaline was already beginning to pump.  I could feel it.

I sat down in my usual spot and took out my container of birdseed, and the blanket, opening the first and draping the second across my hips.  Now here came Spunky, as usual, for his treats, swimming quickly toward me.  We had prayed that if the Lord did NOT want us to take him anywhere, He would cause Spunky NOT to show up that day, but here he came, and now, here he was jumping up onto the rocks and stepping in between my legs to get his treats that I was holding for him in my lowered hands.  I let the birdseed fall to the ground, up as close to my torso as possible as I was sitting there with my outstretched legs forming a V on the rocks, and Spunky was happy to graze on the pile of seeds on the ground.  Quietly taking hold of the edge of the blanket to the left and right, I waited for him to step just close enough that with one swift lunge I could throw the blanket over him and gather him in it to my chest all in one motion. My heart was pounding slightly as I held my breath, waiting to spring......then suddenly some people came along the trail and seeing Spunky and me, stopped to watch and chat.  Phooey.  I would have to wait and try again.

Finally my chance came, and I lunged to envelope Spunky, and he gave one surprised squawk as I lunged, but was silent in the black blanket which was now hugged close to my body.  Just as I had reached to catch him, in that very moment a couple came around the corner on the path.  I had pounced and Spunky had squawked when they were no more than 4 or 5 feet away.....but miraculously they just kept on walking as though they had not heard or seen a thing! GOD....had helped me. He had blinded their eyes, just like we had PRAYED He would in such an event!  I stuffed our little goose into that big ol grey bag, closed the zipper and stood up to pack the birdseed away and start off as I had come, with the two bags, one over each shoulder.  The grey bag was a lot heavier now though lol!  I walked along the trail past people with dogs, fishing poles or kids, over the bridge, and past a tall park ranger who greeted me with a polite invitation to have a nice day as I passed him within two feet.  Spunky did not say a word, and did not squirm about in the bag either.  He was perfectly behaved.

When I got him to the car I slipped the whole bag into the crate and then eased the bag off him so he could stretch and breathe again, and drove VERY happily and RELIEVED to what was about to be his new home.  My little passenger didn't care much for the motion of the car under his feet.  He pattered around a lot on the plastic tray in the crate while we were moving, and stopped whenever the car stopped at a light.  Finally we were at the park which would be Spunky's new home, and I stopped and got out and went around to the rear passenger door to get Spunky out. He just stood there quietly looking at me as if to say, "What on EARTH is all this ABOUT?"  He stood calmly when I opened the door of the crate, and listened attentively, or so it seemed, when I explained the whole thing to him, and how we hated to unsettle him like this, but we LOVED him, and wanted to save him from the certain perils of winter in his old home.  He looked at me with his big dark eyes, and didn't say a word or move a feather when I reached in and lifted him out of the crate.  Only when I lowered him to the ground, did he make any attempt to fluff and straighten his damp (sweaty) feathers, and walk away;  but he was walking AWAY from the duck pond area, so I had to herd him back in the right direction, which did cause him a scare, and made him run from me.  I was SO sad to have caused him an anguish like this.  Hoping he would hear the ducks quacking in the stream and head there, I turned back to doing a bit of a clean-up on the crate and the edge of the car-seat, where he had nervously projected the contents of his bowels.  The poor little guy couldn't help that.  Next I went and sat down on the grass to feed the flock of pigeons, ducks, seagulls and one goose.....all of whom had come flying and running the instant they had seen me with my bag of birdseed! They were very sweet, and it gave me great joy to help God supply their needs, but alas, our Spunky had disappeared I knew not where, and I was heartsick for him, and for the awful fright I had cause him, and praying fervently that the Lord would help him settle in.  Alas, I did not see him that day, nor when I went the next day either, but on the third day I DID see him!  He had found FOUR other geese and was happily hanging out with them! They were older, larger and wiser geese who knew the ropes, and they would help him know what to do, where to go, and to feel at home!

Our dear little Spunky not only has a new home, but a new goose FAMIY too! Now he is not lonely any more, or hurting from the loss of the family that had to leave him to fly south.

What a THANKSGIVING it has been for Joe and me, to see the LORD....so loving and kind....answer our prayers and take wonderful CARE of our OWN little Thanksgiving goose!!  THIS thanksgiving weekend is special indeed, because the Lord SAVED our Spunky, and showed US just how TRUE are all the promises in His WORD!

”Behold the fowls of the air: for they sow not, neither do they reap, nor gather into barns; yet your heavenly Father feedeth them. Are ye not much better than they?”  Matthew 6:26

Copyright © 2019 Love Canada Geese. All Rights Reserved. All images on this site are protected by copyright laws.