The most moving story about a Canada Goose!

How a Canada goose changed my life, influencing even the direction of my career 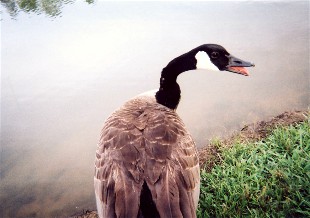 Zoey wards off an intruder 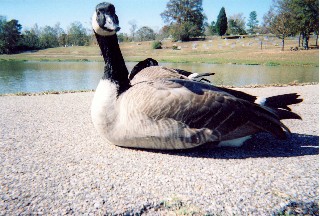 I'll be sitting quietly and suddenly I'll sense this movement behind my back and a long neck will creep around my shoulder, inching its way to my shirt pocket, where I always keep a few crackers stashed.
Sometimes, for a few seconds, I'll think it's Zo and then I'll remember it can't be Zo.
The Grandparents are also still here, continuing a 10-year reign as the lake's power couple.
Best of all, the delight that comes from just being in the presence of geese - the surprise visits, the boisterous reunions, the built-in enthusiasm - has resurfaced.
The other day, I was feeding some 50 geese when a gander approaced with a mate and four goslings, and walked right up to me.
He seemed unusually comfortable in my presence as he ate from my hand.  I must know at least 500 geese by name or sight, but for some reason I couldn't place him.
I sat with the family awhile to see if it spurred any recognition.  Some time later, he began uttering a series of soft, barely definable honks, and suddenly I knew who it was.
Zoey's mate, Dad.
"It's good to see you," I said, in what was a bittersweet reunion.  I was delighted that he had found another mate but his presence brought back still-fresh memories of another goose - and another time.
I reminded him of the first time he took bread from my hand.
For ages, he had refused my offerings, preferring to keep his distance.
Then one day I held out a piece of bread and with no prompting, he simply walked over and took it.
"I don't believe it," I said.  "This is cause for celebration.  What has it been, three years since I've known you?"
He didn't acknowledge my comments that day, as his former mate would have, but from off in the distance I swore I heard a barely perceptible, unmistakable "huh."  Perhaps a heaven-sent honk of approval from a beloved goose whose spirit - if not her physical presence - continues to permeate a park she once ruled.
Even today, children still ask if I know where she is ...

This story won third place in non-fiction in the 2013 Alabama Writer's contest.